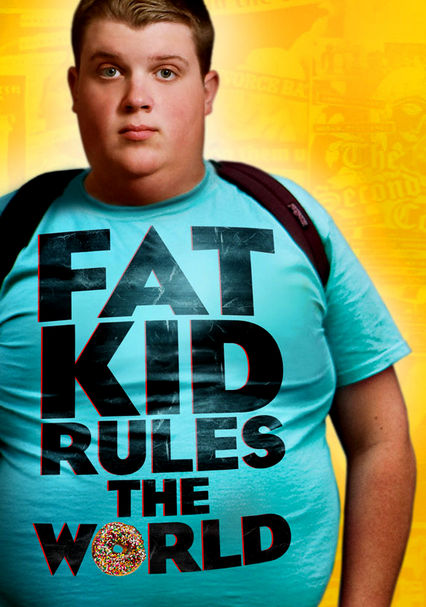 2012 R 1h 34m DVD
Depressed, obese teen Troy is about to step in front of a bus and end it all when fate enters in the form of Marcus, a free-spirited street musician. Under his samaritan's nonjudgmental wing, talentless Troy finds acceptance in Marcus's punk band.

Parents need to know that Fat Kid Rules the World features realistic high school situations, including an unpopular boy who's been ostracized for being overweight and a homeless teen who's angered everyone around him because he lies, steals, and takes drugs. There's plenty of swearing ("f--k," "s--t," etc.) and many scenes involving teen drinking and implied drug use, though nobody is actually shown taking drugs. A few scenes include fantasy sequences; some are violent/gory, while others are sexual fantasies involving women in their underwear. One teen character briefly works as a male prostitute; another masturbates to online porn. Despite all of this edgy content, this book-based dramedy is uplifting because it shows how the two characters help each other overcome their respective problems in ways that are both satisfying and believable.

Troy imagines horrible things that could happen to him, including getting hit by a bus, slashed with a razor, and shot by a security guard. All of these brief moments involve notable blood and gore, but they're gone quickly as he's brought back to his senses.

At the start of the film, Troy has few friends and not much of a life. But Marcus drags him out of his shell and encourages him to pursue music. Troy eventually becomes a school leader, organizing a concert to cheer up his despondent pal and reaching out to help someone in need.

A teen character steals pills from his friends' bathrooms and brags about finding Oxycodone. He likes to drink beer and appears to be snorting something at a concert. He later collapses and is hospitalized, in part because of his drug habit.