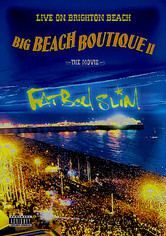 2002 NR 1h 30m DVD
After the runaway success of his 2001 performance at England's Brighton Beach, Fatboy Slim returned a year later for this electrifying encore. Thousands fill the beach for the ultimate dance party with Slim spinning tunes by artists such as Basement Jaxx, Tim Deluxe, Mint Royale and more. Songs include "Star 69," "It Just Won't Do," "Sexiest Man in Jamaica," "Hi Jackers" and "Get Me Off."