Father of a Soldier 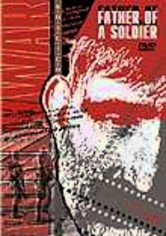 Father of a Soldier

1965 NR 1h 22m DVD
The ravages of war go under the microscope in this moving film, directed by Rezo Chkheidze and first released in the 1965, about Giorgi Makharashvili (Sergo Zaqariadze), a peasant who travels to see his injured son at a hospital. When he gets there, he discovers that his son, a soldier, has been treated and sent back to the front. Giorgi decides to follow him there and witnesses the battle against fascism.