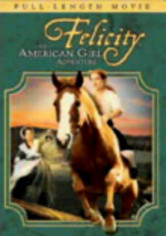 2005 NR 1h 26m DVD
In colonial Williamsburg, Va., 10-year-old Felicity becomes enamored of a beautiful mare and attempts to rescue the horse from its abusive owner. Along the way, she learns valuable lessons about independence, responsibility and loyalty.

Parents need to know that this movie is part of the hugely popular American Girls doll/book/entertainment juggernaut. While the content is quite tame overall, a child does sneak out of her house each morning even though her parents have forbidden it. She first steals -- then eventually sets free -- a mistreated horse without significant repercussions. Another character runs away from a contractual agreement to follow his political beliefs but eventually returns and works out a compromise. A beloved grandfather dies, and his passing is treated with dignity and love. A father is jailed for his political beliefs, and a mother nearly dies in childbirth. Reflecting the Revolutionary War era, African Americans are shown only in roles of silent servitude.

The frisson of interest between Felicity and Ben is chaste and sweet.

A horse is repeatedly threatened by its drunken owner, but the only violence shown onscreen is the owner being dragged through a mud puddle by the horse. The same man threatens Felicity verbally and, in one scary moment, nearly catches her on his property.

A character sneaks out of her house against her parents' wishes but suffers no repercussions beyond a mild reprimand. An alcoholic character is scary but softens when other characters show concern and care. Loving relationship between Felicity and her doting grandfather. Characters have political disagreements but maintain loving friendships. African-American characters are only shown in roles of silent servitude (reflecting the 1700s setting).

Because this movie is a spin-off of the popular American Girl doll collection, there are many product tie-ins -- though none are overt. You can buy the movie's outfits and accessories for the Felicity and Elizabeth dolls.

Alcoholism is cited as the reason for an unlikable character's fall from civility.