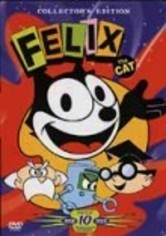 1958 NR 1h 45m DVD
From the classic TV series that aired in the late 1950s comes this collection of 10 restored and remastered color episodes that follow the zany adventures of mischievous feline Felix the cat, his buddy Vavoom and Felix's nasty nemesis, the Professor. Also along for the fun is Felix's cerebral nephew, Poindexter. Extras include a trivia game and "Feline Follies," the 1919 short featuring Felix in his unofficial film bow.

Parents need to know that Felix the Cat is a 1950s animated series based on a cartoon character from silent 1920s films. Each episode sees the mischievous titular feline face off with his human adversary, who's out to steal the cat's bag of tricks. The show moves at a pretty slow pace, especially compared to modern cartoons, and conflicts aren't particularly violent, but what mishaps do exist (crashes, long falls, machines that turn people into stone) have only momentary effects. Your kids won't learn any valuable lessons from Felix's antics, but there's equally little to worry about in the content.

Cartoon bumps, scrapes, and scuffles have no real effect on the characters, who crash through walls and endure long falls and other impacts without a scratch.

The show presents good and evil in very simplistic terms and always gives Felix the intellectual edge over his human adversaries, who usually fall victim to their own plots against him. In this regard, it's not realistic, and it makes light of conflict that's resolved by trickery and manipulation.