Femi Kuti: Live at the Shrine 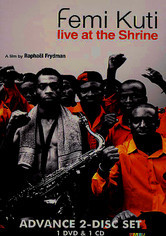 Femi Kuti: Live at the Shrine

2004 NR 2h 13m DVD
This combination concert film and documentary features the infectious music of bandleader Femi Kuti and his Afrobeat group, Positive Force, as they play before an exuberant crowd in Kuti's Nigerian hometown of Lagos. Tunes include "Can't Buy Me," "1997," "I Wanna Be Free" and more. Accompanying the rousing performance are interviews with Kuti and fans, plus a behind-the-scenes tour of the New Africa Shrine built in memory of Kuti's father.