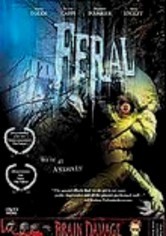 2005 NR 1h 23m DVD
In this terrifying tale, a young couple goes on a desperate search for their daughter who's disappeared without a trace into the nearby woods -- the same woods that have recently claimed and released the mutilated bodies of several animals. Their frantic hunt leads them to a horrific creature, and their attempt to shoot it accidentally leaves their neighbor dead. As the body count rises, the couple's nightmare reaches a shocking conclusion.