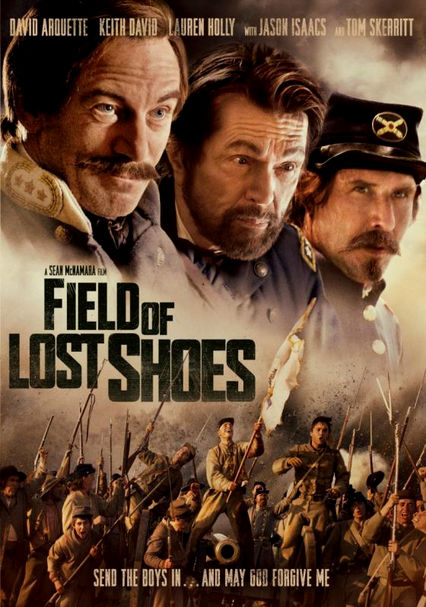 2014 PG-13 1h 36m DVD
In this stirring episode from the Civil War, a raw group of Southern military cadets must band together when they're sent to face the might of the Union Army as it surges toward the unsullied Shenandoah Valley.

Parents need to know that Field of Lost Shoes is "based on" a real Civil War battle in which a group of young Confederate cadets from Virginia Military Institute were unexpectedly drawn into a crucial fight with Northern troops. Still memorialized annually at the Institute, the actual young men who fought (one is only a boy) and those who died are celebrated for their bravery. Using the real-life names of some of the cadets, the movie first builds sympathy for the participants, then thrusts them into the lengthy, intense Battle of New Market, which contains bloody deaths, brutal hand-to-hand fighting, severe injuries, and, generally, grim results. A sweet, innocent love story is detailed as the story moves forward. Field officers, also based on the actual soldiers, are seen drinking whiskey in a few scenes, and there are a few curses ("goddammit" and "damn"). The filmmakers have chosen to keep their boy-heroes non-racist and shown as supportive of the African-Americans who live among them; they all believe they're fighting simply to keep the Northern "invaders" off their land. Too violent and sad for kids; best for teens.

War footage includes death and injuries from cannon fire, rifles, bayonets, and hand-to-hand combat. Characters are shot, blown up, stabbed, beaten, and choked. Blood gushes from wounds and seeps out slowly to kill over time. Soldiers' bodies cover the field in the battle's aftermath. An African-American woman is trapped under an overturned coach; she is saved but bloody and wounded. A young boy watches a slave auction and sees a family brutally separated.

Asserts that even young, vulnerable men may be willing to fight for a cause they deem worthy. Finds heroism in death on the battlefield.