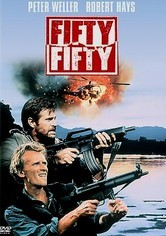 1992 R 1h 41m DVD
Two mismatched mercenaries (Peter Weller, Robert Hayes) must overthrow the tyrannical dictator of a South Seas island in this action-packed adventure comedy directed by Charles Martin Smith. Hired by the CIA, the two money-hungry opportunists face near-impossible odds as they try to recruit an army in the midst of anarchy. Coming up short, their mission is in jeopardy until a gorgeous freedom fighter joins the cause.