Fight for Your Life 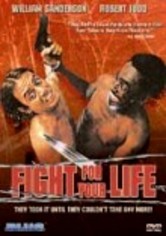 Fight for Your Life

2004 NR 1h 26m DVD
When three escaped prisoners (led by William Sanderson of television's "Newhart" and "Deadwood") break into the home of a middle-class black minister (Robert Judd), he must fight to protect his family from physical and psychological abuse. Originally produced in 1977, this classic example of exploitation cinema was heavily censored in the United States and completely banned in England due to its graphic scenes of rape and torture.