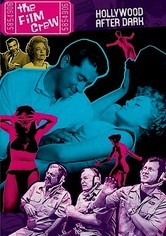 2007 NR 1h 30m DVD
The Film Crew -- Mike Nelson, Kevin Murphy and Bill Corbett, the creative team behind the cult classic TV show "Mystery Science Theater 3000" -- apply their trademark twisted humor and irreverent comments to the campy 1968 drama Hollywood After Dark. Rue McClanahan ("Golden Girls") stars in the film as a would-be actress who tumbles into dark despair, becoming a stripper when her producers exploit her.