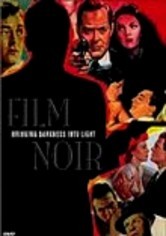 2006 NR 1h 8m DVD
A companion piece to the Film Noir Classic Collection: Volume 3, this documentary examines the shady genre that brought us such classics as On Dangerous Ground and Border Incident. Coined by the French and literally meaning "dark film," film noir has come to embody an essence all its own, a gloomy shadow world peopled with private eyes, femme fatales, losers, drifters and dames. The video also includes five bonus short films.