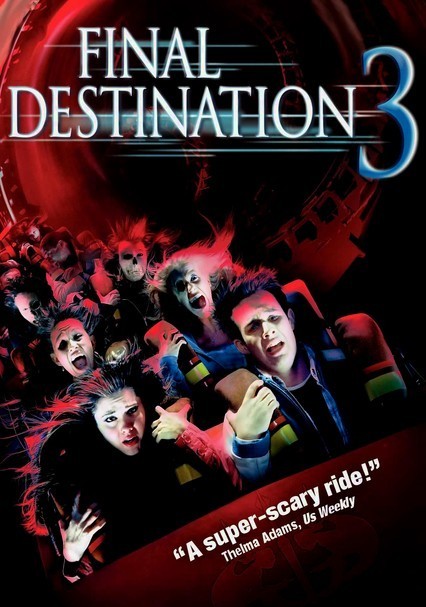 2006 R 1h 33m DVD
Set six years after the original film, this chilling third installment follows the efforts of Wendy Christensen (Mary Elizabeth Winstead) to prevent her premonition from coming true after she foresees herself and her friends in a deadly roller-coaster mishap. But when Wendy's vision becomes terrifying reality, the survivors must face the consequences of cheating death. Ryan Merriman and Kris Lemche co-star.

Parents need to know that this film isn't for young viewers. It's comprised of essentially nonstop violence against teenagers, usually staged in tense or jump scenes. Blood and gore are shown frequently and copiously. Two girls strip and show their breasts full-on before entering tanning tubes. One boy flirts aggressively, using sexual slang. A frightened horse runs through a crowd, accidentally dragging a girl. One girl gives her sister the finger. Lots of scary music and occasional loud noises.

Frequent use of the f-word, as well as slang for genitals, "ass" and "damn."

One joking reference to drugs ("Are you on crack?").