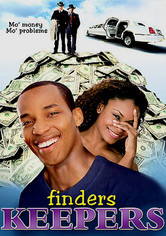 2006 NR 1h 30m DVD
A luggage mix-up leads to trouble -- and hilarity -- in this madcap urban comedy starring Laura Hayes, Duffy Hudson and Joeryl Jackson. When young Dino is dispatched to the bus station to pick up his visiting aunt, he inadvertently grabs the wrong suitcase -- one full of greenbacks belonging to the Mafia. Overjoyed by their good fortune, Dino and his family waste no time spending the money ... until the mob comes to collect their loot.