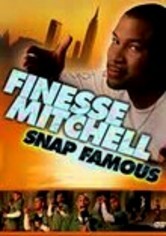 2006 NR 0h 51m DVD
Hilarious and disarmingly frank, "Saturday Night Live" veteran Finesse Mitchell lays the crowd in the aisles with his take on being raised by a teenage mother, dating, cinema decorum and meeting celebrities such as Prince, Jennifer Aniston and Halle Berry. Funnyman Finesse -- a rising star in stand-up comedy -- warms up the audience with his Southern charm but goes for the jugular as he dissects daily life's absurdities.