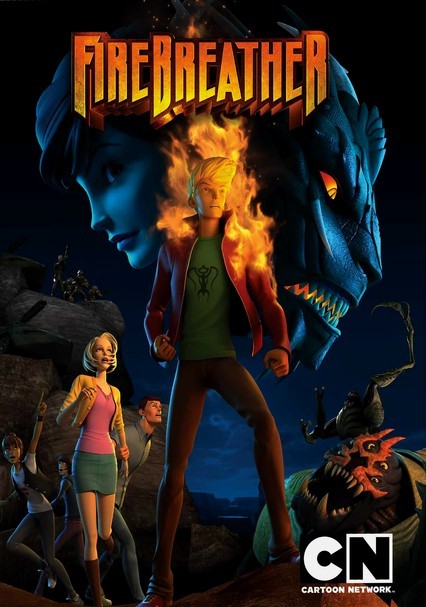 2010 NR 1h 9m DVD
Half-dragon, half-human Duncan just wants to catch the eye of popular girl Jenna, but a run-in with rival Troy brings out the teen's hidden fire-breathing power, setting in motion Duncan's destiny as leader of the monsters called Kaiju. In this electric adaptation of the titular comic book series, Kaiju king Belloc deems Duncan his rightful son and heir, but when war breaks out between monsters and humans, the young hero is torn between two sides.

Parents need to know that this animated movie isn't intended for young kids. Its violent scenes show monsters and humans engaged in battles with weapons like fire breath, brute strength, and gunfire, and on a few occasions, human casualties are presumed. Expect plenty of iffy language as well, including name-calling ("jerk" and "idiot," for instance), as well as some substitute cursing like "sphincter" and "son of a buck." That said, the story has lots of positive content about self-image, friendship, and family bonds for older tweens and teens who can handle the content's more mature nature. Duncan's struggles to define himself and fit in with his peers transcend his supernatural abilities, making him a relatable hero for teens experiencing similar social uncertainties.

A developing relationship leads to some flirting and sweet moments between Duncan and Jenna. In one scene, Margaret offers to tell Duncan the logistics of how she and a 120-foot monster conceived him, but he declines.

Intense exchanges between monsters and humans and among monsters themselves. Some creatures threaten innocent teens, crumbling buildings around them and sending them flying across rooms. Machine guns, fire, and brute strength are the weapons of choice. In one scene, a monster breathes fire at soldiers trying to shoot him, and it's assumed that they're killed, though nothing is shown.

No cursing, but a few instances of stand-ins like "sphincters" in place of "asses," "son of a buck," and "dang" that sounded much like "damn." Also lots of name-calling like "jerk," "freak," and "loser," as well as some marginal language like "crap," "up yours," and "shut it."

The movie celebrates family bonds, parents' sacrificial love for their children, and the importance of not judging a book by its cover. Duncan strives to strike a balance between his parents' opposing expectations of him and his separate ones; in the process, he learns a lot about his strength of character and teaches those around him the same. Other themes include trying to fit in with peers and self-esteem.

The movie is inspired by a comic book series of the same name.