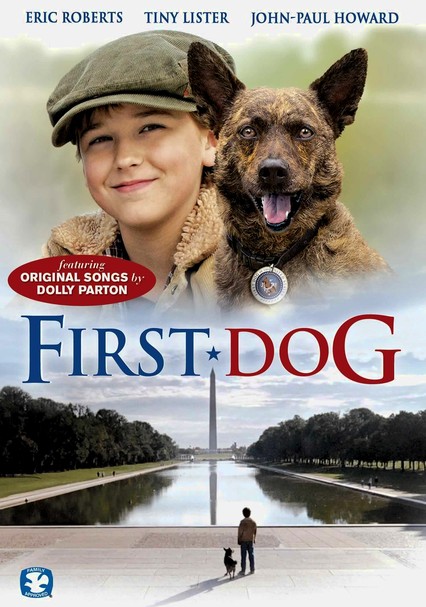 2010 NR 1h 37m DVD
After attending a ceremony in California, Teddy -- the "First Dog" -- gets lost and is found by young Danny (John-Paul Howard). Danny realizes that Teddy belongs to the president (Eric Roberts), but when no one believes him, he decides to return Teddy to the White House by himself. Running away from his foster home, Danny begins a cross-country odyssey to Washington, D.C. This family film features original music by Dolly Parton.

Parents need to know that this ludicrous canine adventure story about a kindhearted young boy who finds a missing dog owned by none other than the president of the United States has some product placement and mild violence. The boy throws a giant lit firecracker (with the active encouragement of the trucker who befriends the boy on the road) into a car driven by Secret Service agents -- not the greatest example for kids. Furthermore, the boy is continually accepting rides from strangers in order to get from one side of the country to the other. That said, his intentions are good, and the message of doing what's right stands out.

As he tries to take Teddy the dog from his California foster home to the White House, Danny survives riding in a camper that crashes and turns on its side, sees two con artists pull knives and guns on their pursuers, and throws a giant lit firework into a vehicle driven by two Secret Service officers. He also narrowly avoids getting hit by a speeding car. Two punches are thrown between two adult characters, but there is no blood nor injury.

The movie intends to communicate that it's always important to do the right thing. And that you mustn't take and keep what does not belong to you. But there are some iffy choices made by the boy including riding in cars with strangers and throwing a firecracker into a car.

Teddy the dog spends some time running through a Petco store, and escapes being pursued by running into a semi-truck filled with Dick Van Patten's Natural Balance Dog Food. Later, Danny and Teddy catch a ride with teenagers who are happy because they're going to the New York, New York casino in Las Vegas, which is later prominently featured.

An adult character pulls out a cigarette to smoke, but never lights it.