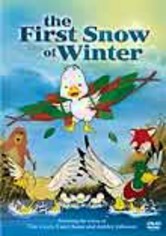 1998 G 0h 29m DVD
As the McDuck clan heads south for their annual migration, happy-go-lucky duckling Sean -- flying at the back of the pack -- spies some doves and wants to play. But he soon finds himself adrift in a cloud and tumbling from the sky when an aircraft clips his wing. Back on the terra firma, an animal named Voley befriends Sean, who braces for his first winter as he awaits his family's spring return. Celebrity voices include Tim Curry and Carol Kane.