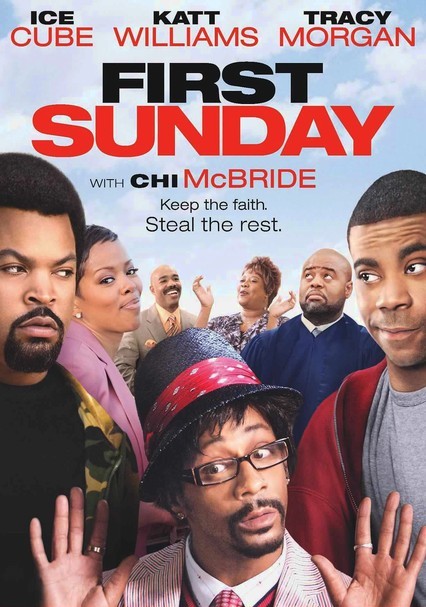 2008 PG-13 1h 38m Blu-ray / DVD
Ham-fisted small-time crooks Durell (Ice Cube) and LeeJohn (Tracy Morgan) find that they've bitten off more than they can chew when their plan to rob a church turns into a hostage crisis. Can the pastor (Chi McBride) and the faithful put the two sinners on the path to salvation? Director David E. Talbert's comic morality play also stars Regina Hall as Durell's nasty ex, and the scene-stealing Katt Williams as a preening choir director.

Parents need to know that this movie -- which stars popular comic actors Ice Cube and Tracy Morgan -- starts out as a heist comedy but ends up more like a Tyler Perry film, with a sentimental, moral message about taking responsibility and never giving up hope. Language is milder than in other PG-13 films but is present (including "ass" and "s--t"), as is the central violent act of taking a group of parishioners hostage in a church. There's no outright sex, but a character does overhear some shenanigans in a massage parlor, and a man receives a sensual massage from what turns out to be a cross-dresser.

LeeJohn gets a sensual massage from what turns out to be a cross-dresser; Durell can hear moans, groans, and a squeaking mattress from another room in the massage parlor. Both men stare at a woman's behind, which gets a few close-ups. Tianna and Durell flirt. Omunique wears revealing, tight-fitting clothes.

Gun-wielding Caribbean gangsters threaten and punch LeeJohn and Durell. Durell brings two guns to the church, where he takes a bunch of parishioners hostage and threatens to harm them if the church's fundraising money isn't surrendered.

At first LeeJohn and Durell, both of whom have a rap sheet, continue to engage in criminal behavior (including taking churchgoers hostage) -- but in the end they learn big lessons about taking responsibility for their actions and repenting for their ways.

Bumper stickers that say "Honk if you like weed" two homeless people pass a bottle of liquor back and forth.