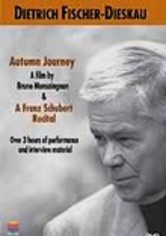 2007 NR 3h 8m DVD
The incomparable Dietrich Fischer-Dieskau is hailed as one of the finest baritones of the 20th century, and this in-depth look at the German singer's life and career, filmed to mark his 70th birthday, showcases his influence on the musical world. Along with performances of 23 Schubert songs, the film features Fischer-Dieskau discussing his technique, his memories of other great musicians and the influences that shaped his impressive body of work.