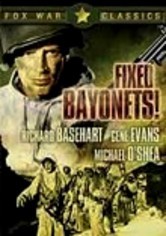 1951 NR 1h 32m DVD
Reluctant Army Cpl. Denno (Richard Basehart) is conflicted about the possibility of taking a human life. But as his unit covers his division's retreat down Korea's snowy mountains, his superiors die one by one. Now, he must assume command -- and kill or be killed. Directed by Samuel Fuller, this Korean War epic co-stars Gene Evans, Michael O'Shea, Craig Hill and Richard Hylton, as well as a young James Dean in a brief appearance.