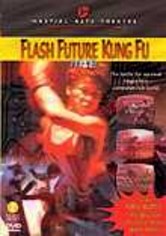 2000 NR 1h 22m DVD
Eddy Ko stars as The Master, a late-21st-century student who secretly participates in underground boxing matches, a sport that is off-limits in a futuristic society in which machines have overtaken man. Meanwhile, a sinister group of skinheads known as the X-Gang has a plan to dominate the world with help from their army of robot soldiers, and the only thing standing in their way is The Master and his fellow martial artists.