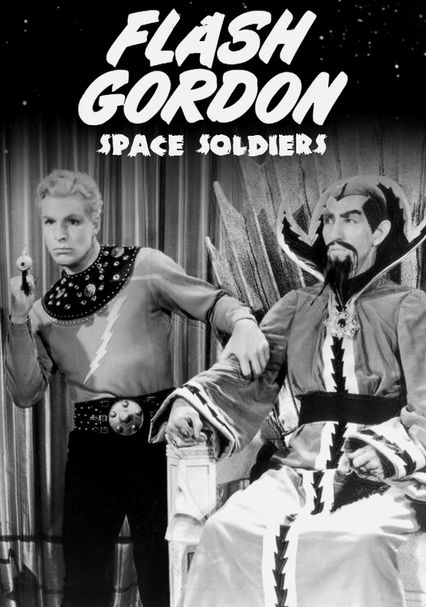 1936 NR 1 season
When the planet Mongo breaks out of its orbit and imperils Earth, Flash Gordon teams with Dr. Zarkov to save the day. After landing on Mongo, Flash, Zarkov and Flash's girlfriend are taken to Mongo's ruler, Ming the Merciless.

When the planet Mongo breaks out of its orbit and imperils Earth, Flash Gordon (Buster Crabbe) teams with Dr. Zarkov to save the day. After landing on Mongo, Flash, Zarkov (Frank Shannon) and Flash's girlfriend, Dale (Jean Rogers), are taken to Mongo's ruler: Ming the Merciless (Charles Middleton). With help from Ming's daughter, Flash gets down to the business of stopping Ming and saving Earth.

Parents need to know that Flash Gordon (1936) was the first of many film serials, movies, and TV shows about a classic comic strip character whose intergalactic travels brought him face to face with an evil emperor and his loyal minions. This 1936 version is rife with stereotypes, from the classically handsome blonde hero to the Asian-inspired tyrant (played by a white actor, of course) who delights in torture and control. Likewise, women are chronically helpless and forever in need of rescuing, and they're often pawns in men's power struggles for dominance. Flash is subjected to all sorts of potentially fatal predicaments ¿- facing off with sea monsters, giant lizards, and half-breed humans ¿- and people on both sides use ray guns, swords, and knives in addition to wrestling-style brawls. Even so, there's little blood and the hero always emerges all in one piece.

No nudity or sex, but it's implied that Ming gets physical pleasure from the beautiful women who surround him. He also keeps devices at hand that can hypnotize and force the women to do his bidding, as when he arranges to marry an unwilling Dale. Men are often shown shirtless.

Fistfights and wrestling matches abound -¿ marked by strangulation and sword fighting ¿- and laser guns are the weapon of choice. There's not a lot of blood, but some characters do die. It is disturbing how much enjoyment the evil Ming gets from subjecting victims to torture like fighting oversized lizards and human half-breeds. There's always a sense of impending doom, and cliffhangers leave the heroes' fate in question.

Because of its age, the show includes some stereotypes that might be seen as offensive by today's standards. Ming's character is played by a white actor in make-up designed to make him look Asian, and he's an evil tyrant who delights in others' pain. Women are second-class citizens, typically damsels in distress, and rarely able to fight their own battles. And, of course, Flash is the ubiquitous golden hero, complete with chiseled abs and a knock-out smile.

This film serial was inspired by a comic strip of the same name and in turn inspired multiple movie and TV show follow-ups.