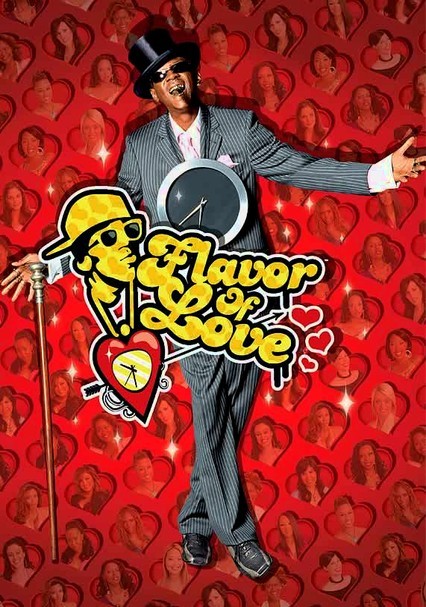 2006 TV-14 3 seasons
Rapper Flavor Flav (of Public Enemy fame) -- the hype man with a giant clock around his neck -- attempts to find love in this smash-hit VH1 reality show. Twenty ladies with fun nicknames like Bunz, Hotlanta and Prancer compete for Flav's affections. Helping him narrow down his choices is his mother as well as his former flame, actress Brigitte Nielsen. Every episode features high drama among the girls and lots of laughs.

Much like "The Bachelor," this 10-part reality series pits young women against one another to win the heart (and clock) of a man -- in this case, it's Flavor Flav (of Public Enemy fame). After his ill-fated relationship with Brigitte Nielsen played out on VH1's "Strange Love," Flav is looking for a new lady among 20 hopeful contenders. He puts them through their paces, including a lie-detector test and a cooking competition judged by his mother.

Public Enemy's Flavor Flav is back with a second round of his reality series, welcoming 20 new women to his mansion with the hope of finding someone "real." He tests the women to see who's really here for Flav and who's just a gold-digger after his fame and fortune. Tension in the crib is high as the contestants battle for attention by completing challenges such as a dance competition and holding down a job at Flav's favorite restaurant.

Public Enemy front man Flavor Flav returns for another season of love and drama as 21 women vie for his affections in this outrageous reality series. Sharing a posh mansion in Los Angeles, the babes snipe and scuffle as Flav puts them through a variety of tests to prove their love for him. Which lucky lady will capture Flav's heart? Only the shocking finale in Paris will reveal the answer.

Parents need to know that the show's female contestants perform challenges and go on dates with Flavor Flav (rapper and star of The Surreal Life and Strange Love), who will, by the end of the series, choose one to be his girlfriend. In their attempt to win his heart, the women degrade themselves and put each other down. Although teens will want to watch (it's like train-wreck TV -- you can't look away), much of this cartoonish, intentionally over-the-top show's content is wildly inappropriate for kids, and it definitely promotes an unhealthy view of male/female relationships.

Plenty of skimpy outfits (lingerie, etc.) and sexual innuendo. In one episode, for example, Flav -- in an attempt to ferret out a solution to a problem -- says, "I'm going to put my finger on it; hopefullly she'll let me put my finger on it."

Sends the message that it's OK to step all over someone and put them down to win a contest and that it's OK to do anything to get a man. Lots of conflict between the contestants, too -- spitting, slapping, cat fights, etc. One contestant defecated on the floor because she "couldn't hold it."

Flav is a rap artist; the show helps promote him as a "brand." He's also done two other shows for VH1.