Flight of the Conchords 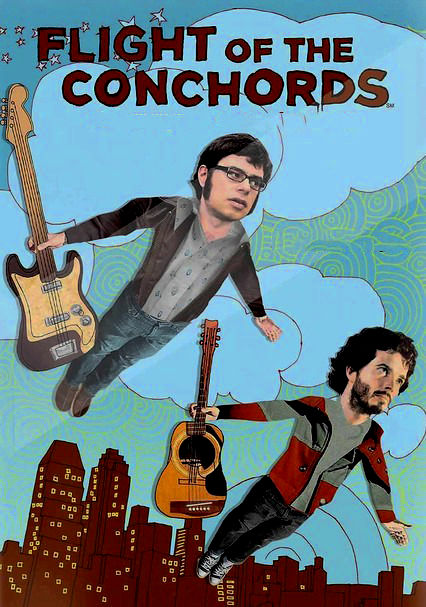 Flight of the Conchords

2007 TV-MA 2 seasons
Naïve but unsinkable New Zealand folk rockers Jemaine (Jemaine Clement) and Bret (Bret McKenzie) move to New York City to bring their act, The Flight of the Conchords, the attention it deserves in HBO's quirky sitcom, which showcases the duo's clever and diverse musical parodies. The road to stardom, however, proves rocky and confusing -- despite the support of their agent, Murray (Rhys Darby), and their one-woman fan club, Mel (Kristen Schaal).

New Zealand folk parody duo Bret McKenzie and Jemaine Clement play fictionalized versions of themselves in this Emmy-nominated HBO comedy series that follows two somewhat dim-witted pals trying to make it big in New York City. They must deal with their inept manager, Murray (Rhys Darby), who films their first music video on his cell phone; their only fan, Mel (Kristen Schaal), whose adoring attention verges on stalking; and their own childish natures.

Jemaine Clement and Bret McKenzie return for the sophomore season of HBO's acclaimed folk musical, which continues to follow the fictional travails of the Kiwi duo as they struggle to navigate the music industry and the singles scene in Manhattan. Captured with a handheld lens, the pair's musical outbursts and lyrical commentary about the absurd characters and situations they're forced to deal with make for some highly original television.