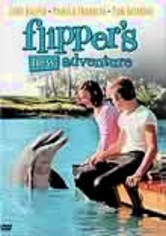 1964 G 1h 34m DVD
After learning that their home is threatened by the impending construction of a freeway, Sandy (Luke Halpin) and his dolphin best buddy, Flipper, take to the sea and end up on a remote island in the Bahamas that's inhabited by modern-day pirates who are terrorizing an English family. Pamela Franklin and Tom Helmore co-star in this sequel to the hit film that was based, in turn, on the hit television series.