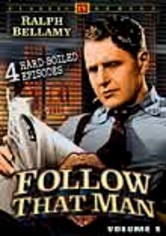 1949 NR 7 discs
One of television's earliest private eyes, Mike Barnett (Ralph Bellamy) was known for solving mysteries throughout New York without using a gun. Broadcast as a live program from 1946 to 1951 and sponsored by R.J. Reynolds Tobacco, this popular series (which also went by the title "Man Against Crime") later starred Robert Preston as Barnett's brother, Pat, with Frank Lovejoy taking over the lead role for the final season in 1956.