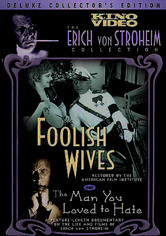 1922 NR 3h 42m DVD
Foolish Wives, the first film in this special double feature showcasing the work of Erich von Stroheim, explores the boredom and disdain felt by one woman for her husband, an American diplomat who's obsessed with his work during their holiday in Monte Carlo. The second feature, The Man You Loved to Hate, is a compelling documentary about von Stroheim, the mysterious man whose role as a cinematic genius in the 1920s is still highly regarded today.