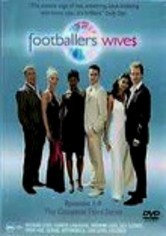 2002 NR 2 seasons
The world of British football serves as a hotbed for intrigue and racy romance in this humorous drama series. While their husbands pursue their athletic careers, the titular wives backstab, betray and plot their rivals' downfalls with gusto.

Their husbands are superstars, beloved by many and chased by a conniving few. But although their lives are far more glamorous than they ever imagined, these "football wives" struggle with the same pressures as everyone else. Like others, they work on fashioning their true self and hope their spouses will stay faithful -- only they have to manage under the spotlight. Catch the first season of this British series that unmasks husbands and wives alike.

Tanya is devastated to discover that her new husband isn't rich. But she finds solace -- and a formidable new foe -- after they sign a new player to the Earls Park club. Meanwhile, Kyle takes up with Elaine and grapples with gambling addiction.

Parents need to know that there's very little to do with sports in this imported English soap opera. Instead, it's a down-and-dirty look at the life led by superstar footballers (aka "soccer players") and their wives. Life out of the sporting arena is more menacing than anything that unfolds on the field.

Is there anything else? Seduction is the name of the game, as are numerous couplings, lots of risque outfits, and partial nudity.

Brawls and catfights are common -- as are more insidious, mental battles, such as blackmail.

Racy behavior is accompanied by equally racy language (e.g. "You look like s__t"). Though expletives don't pepper every scene, double entendres do (for example, a woman propositions another by peeking at her breasts and saying, "I've seen worse").

No one behaves in this over-the-top drama. A partial list of crimes: Kidnapping, extortion, infidelity. You name it, it's here.

This is an affluent world, and the wives parade in only the best clothing and jewelry. Some clearly luxury brands.

Drinking, Viagra abuse, smoking: Not much is left untouched.