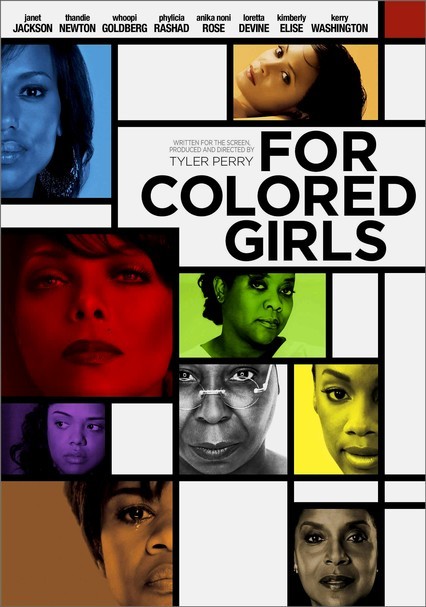 2010 R 2h 14m Blu-ray / DVD
Tyler Perry directs his own adaptation of the Obie-winning stage play by Ntozake Shange, constructed as a series of poetic vignettes that collectively explore the lives of modern African American women.

Parents need to know that this drama from filmmaker Tyler Perry deals with incredibly intense, disturbing issues -- including rape, domestic abuse, infidelity, and unplanned pregnancy. The story has a lot of sexuality, language, and violence -- the most difficult-to-watch scenes center on a rape and two children being killed by their own father. While the sex scenes aren't overtly graphic, there are lots of flashes of skin, plus passionate kissing and discussions of promiscuity. Language includes "f--k," "s--t," "bitch," and "a--hole." Still, despite all of the mature themes, the movie's messages about standing up for yourself and asking for help may be worthwhile for older teenagers, especially young women, to take to heart.

Several scenes of partially clothed men or women and of couples kissing. In one scene, a girl describes the events leading up to losing her virginity. One character is openly promiscuous -- to the point that one man she brings home assumes she's a prostitute until she throws him out. One character is often shown in revealing/tight-fitting clothes, a robe that's half open, or just panties and a top.

Disturbing violence in several scenes -- including an angry, drunk, and psychologically unstable father dropping his children out their apartment window, killing them both. Before that, he's also abusive toward his wife. In another scene, a woman is raped in her home by a seemingly sweet man whom she'd invited for dinner. A mother hits her grown-up daughters.

Many of the movie's messages aren't exactly positive, but they're important for young women to understand -- that even men who seem nice can turn out to betray you, that it's never OK to keep quiet when your partner is being abusive, that a man who cheats on you again and again isn't worth trusting, and that it's important to ask for help if you find yourself in a hopeless relationship.

People drink wine and cocktails at a club, at a bar, and during a dinner date. One character drinks to excess on a regular basis.