For Da Love of Money 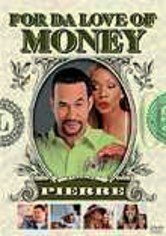 For Da Love of Money

2002 R 1h 32m DVD
African-American stand-up comic Pierre, appearing in his first starring role, is the Renaissance man behind this comedy that he also wrote, produced and directed. Cash flow's been tight for Dre Mitchell (Pierre), especially since he lost his job. But when thieves use his backyard to stash $25,000 they stole from an armored truck, he literally hits pay dirt. Should he spend it? Nearly everyone who wants a cut seems to think so.