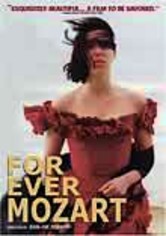 1996 NR 1h 25m DVD
From acclaimed new wave filmmaker Jean-Luc Godard comes this episodic meditation on war and art -- etched with the French director's distinctive vision -- that reflects on reality and the creative process. The narrative follows a veteran movie director's efforts to put on and film a play in battle-scarred Sarajevo, Yugoslavia. Along the way, the cast and crew face numerous crises, ranging from personal conflicts to capture by the armed forces.