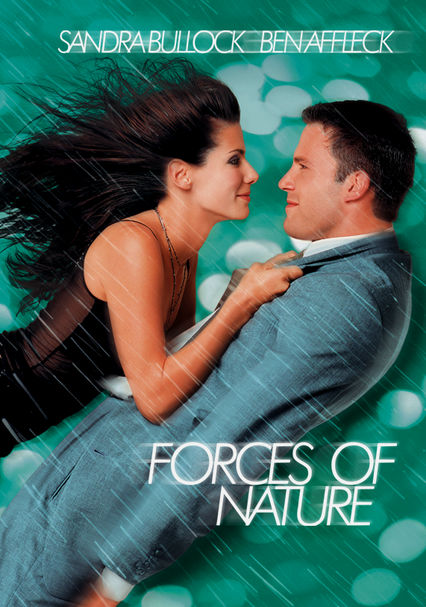 1999 PG-13 1h 46m DVD
When a wayward seagull and approaching hurricane ground the flight en route to his wedding, uncomplicated Ben is stuck renting a car with eccentric free spirit Sarah. As the odd couple connects, Ben begins to question the marriage that awaits him.

Parents need to know that Forces of Nature is a romantic comedy about having cold feet before marriage and involves some illegal drug use (a character smokes a joint while driving; an arrest follows), drinking to cope, a bachelor strip scene (no nudity), a gay-bar striptease to raise money (no nudity), and a subplot of a mother who abandoned her child. Overall the movie presents a fairly cynical take on the horrors of marriage. Though the ending message is ultimately pro-commitment, the heavy themes, sometimes dark messages, and sad circumstances are better for teens and adults.

There is no direct nudity but plenty of sexuality and suggestiveness throughout. A woman and man perform a striptease at a gay bar in which a man undresses to his underwear while a woman writhes suggestively against him. A woman performs a striptease popping inflated balloons on her chest while wearing a thong and giving a man a suggestive lap dance. Men and women kiss passionately in a few scenes. A woman is shown undressing to shower, and the camera follows her back and legs before cutting away.

Minor peril involves a plane crash with minor injuries, a scuffle between men that involves punching, and a slew of natural disasters, including fires, hurricanes, and various kinds of inclement weather.

Minor insulting language, gendered insults, and some profanity, such as "ungrateful bitch," "lying whore," "goddammit," "hell," and "shut up."

Forces of Nature explores positive and negative themes about loyalty and honesty in romantic relationships. Commitment and marriage are portrayed both as the ultimate positive sacrifice and as an outmoded, suffocating trap destined to make you miserable. Overall, the film's message errs on the side of commitment as worthy and honorable.

Adults are shown drinking at bars, strip clubs, and wedding-related ceremonies. A woman and man share a joint while driving; the man is arrested for drug possession. In one scene, a woman drinks straight from a bottle of wine while smoking a cigarette.