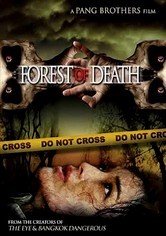 2007 R 1h 38m DVD
Detective Ha (Qi Shu) investigates the rape and murder of a woman who died in the Forest of Death, a popular suicide spot considered haunted. With the help of botanist Shum (Ekin Cheng), Ha tries to identify the killer by unlocking secrets held by the forest's plants. This horror movie also follows Shum's girlfriend, May, a television reporter who grows increasingly popular as she chronicles the paranormal activity happening in the forest.