Forest of the Dead 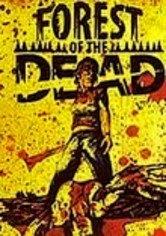 Forest of the Dead

2007 NR 1h 19m DVD
Several friends go on a camping trip and decide to split into two groups, at which point one of the groups is turned into flesh-eating monsters. Realizing they're in danger, the others take cover in the darkness while formulating an escape plan. But beheadings and dismemberment await those not quick enough to get away in this bloody thriller, which sparked controversy for its allegedly offensive portrayal of gay people.