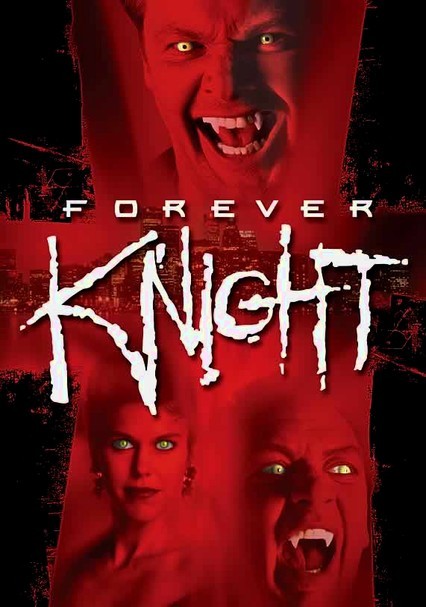 1992 TV-PG 3 seasons
After 700 years of spilling the blood of the innocent and evil alike, vampire Nicholas Knight (Geraint Wyn Davies) vows to atone for his sins by serving as a homicide detective in modern-day Toronto. Aiding him as he regains his humanity is scientist Natalie Lambert (Catherine Disher). While Nick fights crimes that prompt him to relive key moments from his past, he must also combat the powerful vampire who created him (Nigel Bennett).

This series first aired in 1989 as a TV movie starring Rick Springfield as a 13th century vampire who moonlighted as a police detective. CBS then created a new two-part version of the pilot (titled "Forever Knight") featuring Geraint Wyn Davies as the vampy sleuth who lives in Toronto and must battle super-vampire Lucien LaCroix (Nigel Bennett). Horror and crime detection collide in this batch of episodes that you can really sink your teeth into!

Bring on the Knight! Geraint Wyn Davies is vampy sleuth Nick Knight, living in Toronto and trying to atone for 600 years of bloodletting. In this second season of the ghoulish series, Nick battles Jack the Ripper, gets brainwashed and gets it on with an Anne Rice-type author. It's horror and crime detection that you can sink your teeth into! Catherine Disher, Gary Farmer, John Kapelos and Natsuko Ohama co-star. Brad Turner directs.

Geraint Wyn Davies returns as Toronto detective Nick Knight, a vampire trying to shed his bloodsucking ways and embrace his humanity, in the third and final season of this supernatural crime drama. Changes are afoot as Nick finds his career in jeopardy, gets a new partner (who soon goes missing) and fights the urge to succumb to his vampiric nature. Lisa Ryder, Nigel Bennett and Catherine Disher co-star.