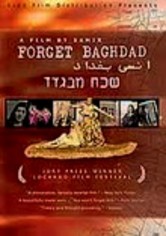 2002 NR 1h 51m DVD
This compelling documentary traces the experience of "Arab Jews" -- people of Jewish religion and Arab culture, also known as Sephardis or Mizrahim -- offering a rare look at a community that has long found itself caught between warring worldviews. Conceived and directed by Samir, the son of an Iraqi Communist who immigrated to Switzerland, the film follows four fascinating Iraqis living in exile in Israel.