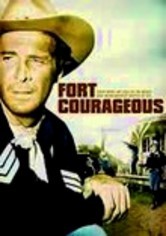 1965 NR 1h 12m DVD
Sgt. Lucas (Fred Beir) is a former cavalry rider trying to rebuild his reputation after being court-martialed for a crime he didn't commit. He replaces a fallen leader in a new regiment and takes his company to Fort Courageous, where they're shocked to find the fort's inhabitants slaughtered. Are the Indians to blame? Don "Red" Barry and Cheryl MacDonald co-star in this Western by prolific director Lesley Selander.