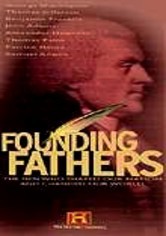 2000 NR 2 discs
The men (and women) who shaped the formative years of the United States of America did so at great personal risk with little possibility of proportional personal reward. But the men's known political, religious and social beliefs are often only their legendary personas; in this series (originally aired on The History Channel), discover the remarkable, unseen private sides of the men who risked everything for the cause of American independence.