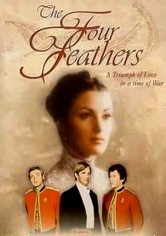 1977 NR 1h 40m DVD
Beau Bridges stars in this action-packed adaptation of A.E.W. Mason's Sun Never Sets as Harry Faversham, a 19th-century officer assigned to battle-torn Sudan. When he refuses to go, three of his comrades send him white feathers as symbols of cowardice. But it's when he receives a fourth feather from his fiancée, Ethne (Jane Seymour), that Faversham sets out to overcome his fears and become a true hero. Robert Powell and Simon Ward co-star.