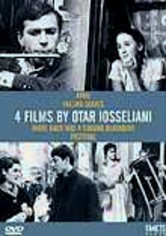 1961 NR 2 discs
Four memorable films by acclaimed Georgian director Otar Ioselliani -- whose work has often been compared with the classic comedies of French master Jacques Tati -- present a collection of contemporary fables about the conflicts between modern life and traditional values. Films include the 45-minute short "April" (1962) as well as the feature-length Falling Leaves (1968), There Once Was a Singing Blackbird (1970) and Pastoral (1976).