Fraggle Rock: Live by the Rule of the Rock 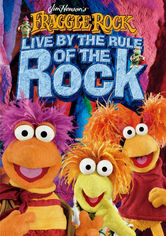 Fraggle Rock: Live by the Rule of the Rock

2005 NR 2h 30m DVD
Jim Henson's "Fraggle Rock" follows a group of cheerful Muppets who celebrate life by playing and building friendships. Three episodes from the popular series are featured: "Catch a Tail by the Tiger," where Gobo must find his uncle, Traveling Matt, in outer space; "Believe It or Not," in which Red and Wembley find a creature who takes on various identities; and "All Work and All Play," which finds Cotterpin Doozer wishing she were a Fraggle.