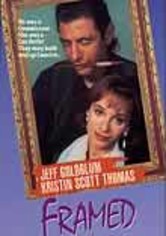 1990 PG-13 1h 27m DVD
After getting burned by his girlfriend (Kristin Scott Thomas) -- a woman who left him with 5 million francs before turning him over to Interpol -- and spending two years in prison, a Paris-based art forger (Jeff Goldblum) adopts a simpler life as a Los Angeles bartender. But when his ex shows up on his doorstep with a new name, a new boyfriend and a lucrative new scheme that requires his skills, he'll have to decide if he'd rather have revenge.