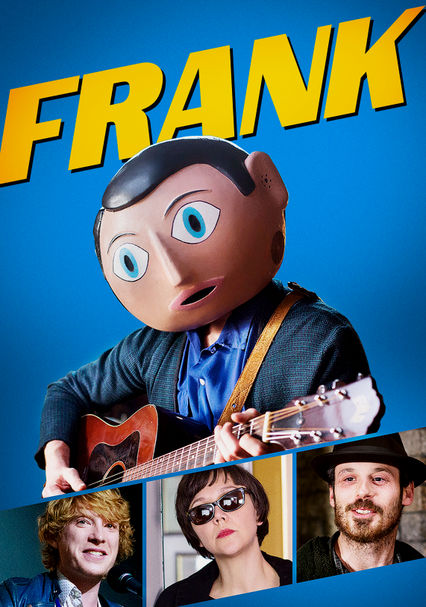 2014 R 1h 36m Blu-ray / DVD
An aspiring musician joins a band of eccentrics led by an enigmatic singer -- who wears a fake head -- and his unstable girlfriend. Creative tension mounts as the group retreats to the woods to cut an album.

Parents need to know that Frank is a quirky dramedy about a "genius" rock musician who wears a fake head and the ordinary keyboard player who becomes involved with him. Language is the biggest issue, with characters using "f--k" throughout, as well as "s--t" and "c--t." Two characters have rough sex in a hot tub, though no sensitive body parts are shown, and there's some additional sexual innuendo. Characters attempt suicide (one succeeds), a character is stabbed (very little blood is shown), and there's general arguing and shouting. Characters also smoke lots of cigarettes. The main character documents his adventure through social media; Twitter is mentioned frequently, and the Twitter logo is displayed, and there are mentions of Tumblr and YouTube.

Two characters have rough, sudden sex in a hot tub; the male character stands up naked, but he's shown from behind and out of focus. There's also some sexual discussion and innuendo: One of the characters is said to have a condition wherein he sleeps with mannequins.

A character commits suicide by hanging himself from a tree. He's given a funeral pyre, and his ashes are collected for scattering. A character stabs another in the stomach, with very little blood shown. (More blood is actually shown when a character cuts himself shaving.) There's another suicide attempt (a character walking into the ocean) that fails. Characters practice self-defense moves that, in one quick scene, grow out of hand. A character is hit by a car. Characters frequently argue and insult one another.

One message could be not to judge a book by its cover. Jon assumes that Frank is a genius and spends too much time trying to be like Frank -- or like others -- than trying to be himself, but in the end he realizes that it's more important to help Frank than to worry about his own troubles. There's also the question of whether an artist should stay true to his vision or try to make something closer to what the people want. The main character uses social media to try to gain the band more exposure/fame.

The main character documents his adventures on social media. He sends lots of tweets, which are printed on the screen along with Twitter's logo. (He also includes hashtags.) Tumblr and YouTube are also mentioned and shown. The idea is that, with tons of followers and subscribers, one can be rich and famous. Events also take place at the real-life South by Southwest festival.