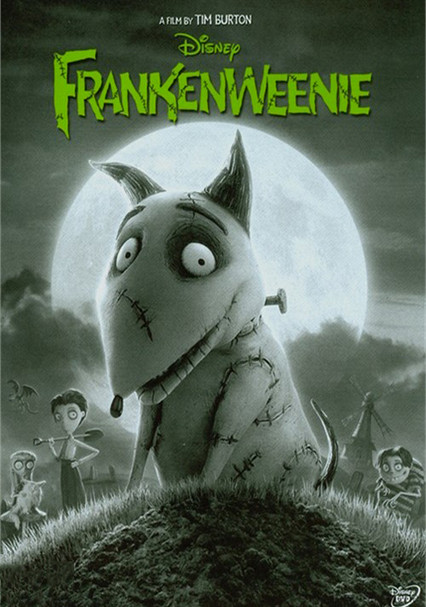 2012 PG 1h 27m Blu-ray / DVD
After his dog is killed in a car accident, an imaginative boy sets out to bring the canine back to life with an electrical experiment. Helmed by Tim Burton, this stop-motion animated tale is an adaptation of the idiosyncratic director's first film.

Parents need to know that Tim Burton's black-and-white, stop-motion animated film Frankenweenie is the feature-length version of a short he made early in his career. Like most of Burton's films, Frankenweenie's tone is dark and creepy and will likely scare kids who are sensitive to the macabre. On the other hand, this tale of a very young Frankenstein who reanimates his beloved pet dog is a great introduction to the horror genre for older kids and tweens who are ready for some scares -- like when a group of kids reanimates various pets that go wild (one ends up as big as Godzilla) and terrorize the town. Pets die in the movie, and the resulting grief is depicted realistically.

Parents hug, a mother reads a romance novel, and Sparky flirts with the neighbor's dog, Persephone. Victor and Elsa are sweet in a flirtatious way.

The movie has a generally dark and frightening tone, augmented by the often-suspenseful music. Most of Victor's classmates are creepy looking, especially the tall and freaky sounding Nassor and the "children of the corn" lookalike with her cat that makes prophetic, letter-shaped poop. Several scary sequences, including an invisible reanimated fish that bites and the entire last part of the movie, when reanimated pets, giant sea monkeys, a mummified creature, and a Godzilla-like turtle terrorize New Holland and its townsfolk. Pets die, and other pets turn into monsters that smash and destroy.

Science and scientific thought are encouraged, but it's also important to have the right motivation behind a scientific project -- i.e. intention and purpose matter. Victor reveals himself to be a brave and loving friend. Grief over a pet's death is depicted in a realistic manner. Parents support their son, even though they don't fully understand why he made certain decisions.