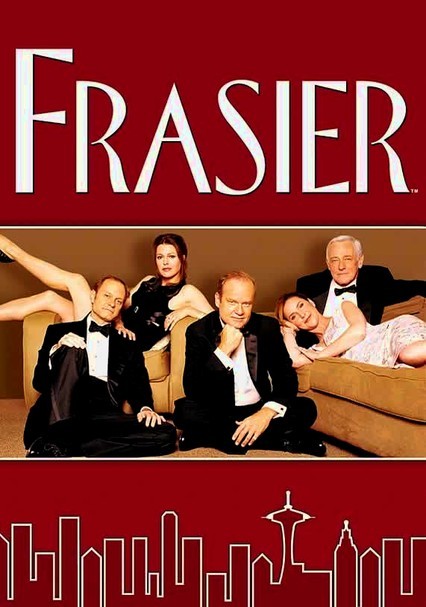 1993 TV-PG 3 seasons
In this Emmy-winning sitcom, Frasier Crane is a Seattle psychiatrist who dispenses advice on his call-in radio show while ignoring it in his own relationships. Meanwhile, his bundle-of-nerves brother and sharp-tongued dad frequently burst his ego.

This eponymous series begins with neurotic "Cheers" shrink Frasier Crane leaving Boston and surfacing in Seattle as a radio host, with his retired dad as his roommate and his uptight brother, Niles, living nearby.

Pompous Frasier Crane, a successful psychiatrist with a Seattle radio show, returns for another hilarious round of comedy that has him ice fishing with Marty and Niles and taking a girlfriend on an ill-fated trip to Bora Bora.

Dr. Frasier Crane continues his reign over the Seattle airwaves -- and yet is at the mercy of his family, including his gruff father Martin and his snotty brother Niles in the third season of the successful "Cheers" spin-off.

Parents need to know that this long-running Cheers spin-off is geared toward an adult audience, so it naturally has a lot of adult humor, including frequent sexual innuendo. Due to some of the characters' fastidiousness and other debonair qualities, there are many references to homosexuality (some of which reinforce stereotypes). That said, the show features strong positive relationships between a father and his adult sons, between brothers, and among friends.

Frequent (if fairly mild) sexual innuendo and farce that might go over the head of young viewers. Some making out and hanging around in robes/relatively skimpy outfits, but no simulated sex acts. Many of the characters are looking for love.

Minor pushing and shoving on occasion. Actions don't cause physical harm -- they're played for laughs.

The show depicts strong, positive family relationships between the Crane men, as well as strong friendships among the characters. There's plenty of pettiness, and themes include single parenthood, divorce, unrequited love, and other mature topics, but the undercurrent is all about being there for friends and family.

Frequent adult consumption of alcohol, including beer, wine, and hard liquor. Prescription drugs are sometimes consumed, but not abused. Adult use of tobacco products is sometimes noticeable, particularly among supporting characters.