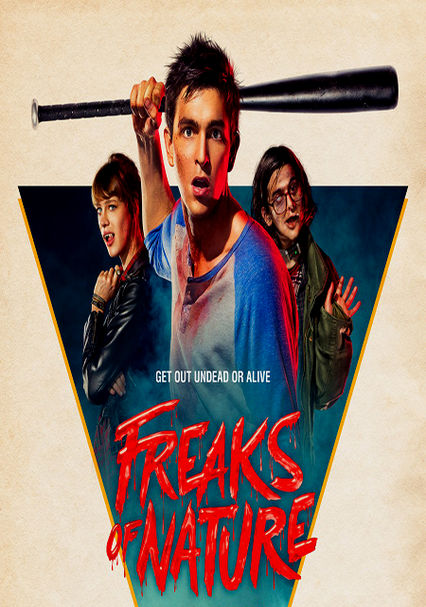 2015 R 1h 32m Blu-ray / DVD
In the face of a massive invasion by aliens, the zombies, vampires and humans living in the town of Dillford must overcome their differences and band together to combat the mortal threat.

Parents need to know that Freaks of Nature is a horror-comedy featuring vampires, zombies, aliens, humans, and even the occasional werewolf. Characters ultimately learn to put their differences aside and work together, but the violence is very strong (albeit played for humor), with fighting, biting, stabbing, killing, brain eating, blood spattering, and blood oozing. Teens talk a lot about sex, attempt to have sex, kiss, and (more or less) actually have sex (naked bottoms shown, but nothing more graphic). Language is strong and constant, including "f--k," "s--t," "a--hole," and much more. A secondary teen character smokes pot regularly, parents appear to be high on some kind of drug, and an adult character regularly drinks scotch. Several products are mentioned, mainly for humor. The movie doesn't try very hard, but it's still somewhat likable.

Teens have sex (or attempting to have sex) and make out. Naked bottoms (both male and female). Males ogle females. A teen girl exposes herself to a teen boy (nothing graphic shown). Persistent sex talk, innuendo. Discussions about a character being a virgin.

Amid the over-the-top gory stuff, disparate characters learn to work together to solve a problem. They teach the rest of the community to stop discriminating against one another.