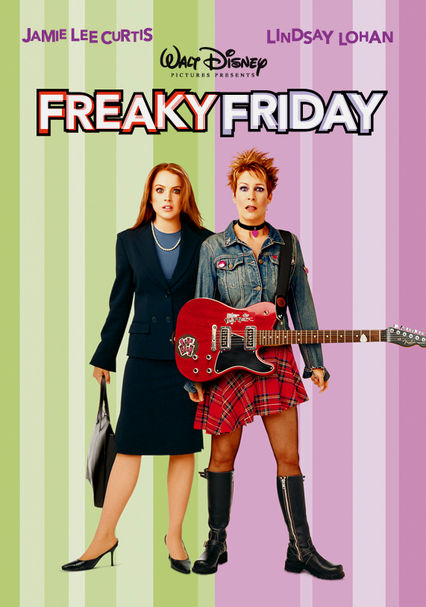 2003 PG 1h 38m DVD
Jamie Lee Curtis and Lindsay Lohan star in this remake of the Disney classic about a bickering mother and daughter who awake to find they've switched bodies, giving each one a peek about how the other person lives.

Parents need to know that Freaky Friday is a switched-identities comedy that will appeal to older kids, tweens, and teens alike. It's a good movie for families to watch together, as it will spark shared laughter and possible lively conversation about parent-child relationships. There is some very mild sexual innuendo as filmmakers skillfully handle the awkward moments when the teen girl in her mom's body and the mom in her teen's body are confronted with potentially romantic moments with the two male love interests. Occasional swearing is used to help define the characters as they adapt to their new and unfamiliar roles ("Oh, my God!" "We're screwed," "harlot," "hell," "fart," "it sucks"). Two earthquakes shake things up a bit, but no one is hurt.

Some sweet kisses, a few lingering ones. Because a teen takes over her mother's body, and her mother takes over her body, there are a few awkward moments when each is confronted with kissing the object of the other's affection. The mom rides on a motorcycle driven by her teen daughter's crush -- she hugs tight as they speed along.

Earthquakes occur when identities are swapped and unswapped. No injuries. A woman tackles someone to stop him from revealing a secret.

This film is a humorous lesson in seeing the world through another person's eyes. In this instance, a mom and daughter, at odds over values, behavior, and hopes, learn to more fully understand each other and get a solid look at the joys and difficulties each of them faces every day. In one exaggerated comic moment, a young girl says she's going to kill herself -- it's not meant to be taken seriously.

Champagne and wine are consumed iin rehearsal dinner and wedding scenes. No drunkenness.