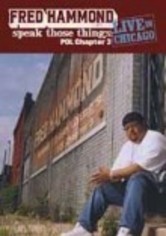 2003 NR 2h 10m DVD
Gospel great Fred Hammond performs with Radical for Christ in this rousing concert filmed live at Chicago's Navy Pier. A former member of the groundbreaking group Commissioned, Hammond is an award-winning singer, bassist and record producer. Songs in this third installment of his "Pages of Life" album series include "You Are My Daily Bread," "I Will Say," "Show Yourself Strong," "That Ain't Nothin'" and more.