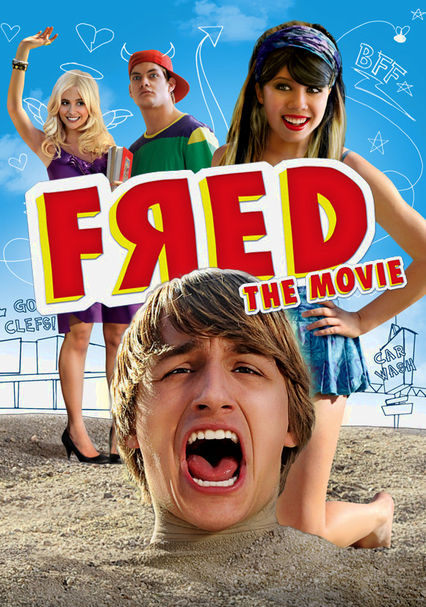 2010 NR 1h 24m DVD
After discovering that his next-door neighbor and ultimate dream girl has suddenly moved away, hot-tempered, squeaky-voiced Fred Figglehorn sets out on a wacky adventure to find her and prove that he's way cooler than other kids think.

Parents need to know that this movie centers on popular YouTube character Fred Figglehorn -- who's a huge hit with kids, though most adults find him very irritating. Yes, Fred's irritating mannerisms, toddler-like tantrums, and high-pitched voice will grate on parents' nerves ... but that's actually nothing compared to how they'll feel about the movie's iffy messages. Fred's obsession with his crush, Judy, borders on stalking and voyeurism, and he's often the subject of bullying, in both the classic and the cyber sense. If that's not enough, factor in the multiple instances of pseudo-cursing (like "gammit"), and it's clear that this is a movie for impressionable tweens to avoid.

The movie centers on Fred's obsession with his longtime crush, Judy, whom he refers to as a "smokin' hot babe." (He also says he wants to take it to the "next level" with her.) Judy wears slinky dresses, skimpy bikinis, and teetering high heels to middle school. A teen boy is seen in his boxers. There's no physical contact, but it's implied that Fred is hoping for some. The game of "spin the bottle" comes up (Fred pretends to play.)

Fred's hyperactivity results in lots of slapstick accidents (falls, collisions, electrocution, etc.), but they're played for humor and not intended to reflect reality. In one scene, a teen falls off a treadmill and suffers a broken arm; in another, boys pummel Fred with playground balls during a one-sided game of dodgeball.

Fred's not allowed to swear, so he concocts substitute phrases to use instead. His favorite -- "oh my gammit!" -- sounds very close to "damn it" and is used frequently. Lots of name calling like "moron" and "idiot," as well as marginal language like "sucks," "buttloads," and "Jesus" (used as an exclamation).

The movie makes light of a tween's unhealthy obsession with a classmate who clearly doesn't return the sentiment. He uses the Internet to locate and attempt to spy on her after she moves. Various forms of bullying go unchecked throughout the story, including name-calling, cyberbullying (tweens post embarrassing videos and pictures of Fred online), and physical attacks during a dodgeball game.

The movie is an extension of a series of popular videos on YouTube, so kids who haven't seen them before will want to check them out after seeing the movie. Fred's name and image grace a line of clothing and accessories marketed toward tweens.

In one scene, Fred's mom cracks open what appears to be a can of beer. From her overall behavior, viewers might infer that she has a drinking problem.